Learn more about the Indigenous Studies Working Group, its aims, and its members. We welcome new members from any and all backgrounds.
Join Us!

We honor the Indigenous peoples whose land became the Greater Washington area, especially the Piscataway, Anacostank, Pamunkey and others. The Biden administration has declared Oct 11 Indigenous Peoples’ Day, as have many states and over 130 cities, including Washington D.C. Viewers are welcome to weigh in on debates about Columbus Day and Columbus statues. On climate change, international Indigenous leaders have become “guardians of the future” and are helping save forests. Native American month is November, a time to reflect on painful legacies. Association of Indigenous Anthropologists (AIA) (new window) recommends readings and reminds us there are 574 federally recognized tribes (new window) in the United States. Historically, about 500 distinct Native languages (new window) were spoken in North America. Currently, Ethnologue lists 245 indigenous languages in the United States, with 65 already extinct and 75 near extinction (new window) with only a few elder speakers left.

An international map for Indigenous locations is a “work in progress” without legal boundaries. It provides a sense of the range of lands and names of Indigenous peoples. NPR published an Americas historical legacy variation map to honor Indigenous Peoples’ Day 2022.

Indigenous peoples—also known as native or aboriginal peoples—identify themselves as the original inhabitants of their home regions. Indigenous groups today are actively protecting, defining, and transforming their own identities in the context of centuries of colonization, forced assimilation, and genocide. The concept of indigeneity and the suffering, survival, and resilience behind it are in need of exploration. Our network is a growing work in progress, and both faculty and student interest at Georgetown is strong. Our members include faculty from several departments and across Georgetown schools in the main campus and Law School. They also include students from councils (CISA and NALSA) on both campuses.

Why do we need a network?

Today’s university- and country-wide soul-searching concerning misunderstandings about race, the fluidity of identity, and the construction of ethnic group solidarities benefits from adding the dimension of Indigenous studies to the mix of Georgetown’s diversity-oriented events and courses. While our campus is rightfully engaged in heightened awareness concerning race, ethnicity, gender, nationalism, and identity, Indigenous peoples are often marginalized—if not getting lost—once again. We need a better framing for students and faculty in the campus community to benefit more systematically from consciousness-raising concerning issues of Indigenous identity, rights, legacies, and (re)vitalization. We hope that this website can become a forum for discussion of issues that are crucial to Indigenous communities. Casa Latina is hosting Indigenous activities, and the Campus Ministry provides space for smudging and meetings. Please check their site and the Circle of Indigenous Students’ Alliance CISA for updates.

School of Foreign Service “Treaties between Sovereigns: An Overview of American Indian and US Relations” was taught by Prof. Charles F. Sams III (Umatilla) and Prof. Stan Thayne Sp. 2021. Stay posted for other relevant SFS courses.

What is Indigeneity? What can we understand about resilience among peoples who maintain their distinct identities with a place of origin and their associated bonds and traditions in the face of conquest and colonization? This course enables broad examination of issues facing indigenous peoples, with particular experiential study of tribes in the Western Hemisphere. Opportunities for deep dive learning about indigenous groups in other places of special student interest are provided. Native communities process various kinds of globalization, marginality and colonial legacies with different degrees of self-determination, land-based sovereignty, dispute and resistance. While indigenous peoples may be lumped together as the “fourth world,” their social, economic, political and cultural revitalization conditions vary widely in “glocal” contexts. Activist efforts at various levels of local, regional, state and global interactions reveal case studies of progress and on-going tensions. We debate U.N. statements on indigeneity, U.S. federal or state recognition variations, and concepts of identity within First Nations communities. The course is designed to enhance student understanding of multi-disciplinary, practical, ethical and human rights synergies within indigenous studies. An important focus is on student direct experience with indigenous organizations, in partnerships for mutual benefit and learning. Particular attention is paid to American Indian communities, with international comparisons. Hot issues where student participation may be welcome include ecology protest; health services; legal groundwork for sacred lands claims, Native American Graves Protection and Repatriation Act (new window) [NAGPRA] logistics, language revitalization and prison justice. The course builds on and is interactive with our indigenous studies website: https://indigeneity.georgetown.edu. (new window)

Eligibility: The class is open to undergraduates in SFS, especially CULP, and Anthropology, with no prerequisites, just enthusiasm. Students from other departments and centers are also welcome. Students interested in Community Based Learning (CBL) and Georgetown’s Diversity initiatives are especially encouraged.

CBL Seminar, Credit and Structure: This 3 credit course fulfills normal SFS and College expectations. It is part of the Center for Social Justice Community Based Learning (new window) faculty cohort that supports active student-community partnerships. Once a week class seminars are augmented by student involvement in community placements for 20 hours per semester. Flexible scheduling enables faculty and CBL staff to help with student projects in specific indigenous-based environments, using outstanding Washington DC area resources for national and international representation. These include the Smithsonian’s National Museum of American Indian, National Indian Educational Association (new window) (P St. based), National Congress of American Indians (new window), National Indian Health Board , and more. We anticipate small group placements, with some possible individual arrangements. In the final weeks we share reports on experiential learning as well as engaging in overarching theme discussions and debates.

Advising: Mentoring is tailored to the students who constitute the class. While most advising is done in person, some communication can be through zoom, skype, and other interactive tools. Writing Center (217a Lauinger) http://writingcenter.georgetown.edu (new window) use is encouraged.

Grading: Grades are based on a combination of class participation (discussions and debates) [30%], a short essay due just after Spring break [10%], a ‘research and experience’ report in the class [20%], and a finale paper that incorporates class themes and the community project [40%].

Readings and films: Most readings will be articles, documents, or chapters in books, not whole books. Electronic versions will be available for many assignments. Together we will augment and update the recommended reading and film lists on our https://indigeneity.georgetown.edu (new window) website. Student contributions relevant to community projects are especially important. A few core yet diverse books or parts of books are required for shared interpretations. These include:

GU’s Kyle Shernuk spoke to the Asia In Depth history seminar on “Indigenous Taiwan: Ethnographies, Identities, and Oceans for the 21st Century” 11/17/2022.

Pope Francis’s reconciliation project for Canada’s First Nations was launched with an apology denouncing “catastrophic” residential schools. Some claimed too little too late, while others wept.

Reparations for the “stolen generations” of schoolchildren taken from their families in Australia were announced. Australia’s National Anthem was edited to become more inclusive. Aboriginal history is reflected in the obituaries of activist Rosalie Kunoth-Monks and singer Archie Roach.

Cultural Survival’s 2022 panel “Securing Indigenous Rights in the Green Economy” is available on youtube. See also their “call to action” for 2022, and their coverage of COP 27.

Some of Russia’s Indigenous people have been speaking out against the war in Ukraine. Russia’s Indigenous are being mobilized to fight in Ukraine at higher proportions than their demography warrants. New laws in Russia further restrict who has the right to be defined as Indigenous. For perspective, see M. Mandelstam Balzer’s recent book. Her book talk was April 2022 for GU’s Center for Eurasian, Russian and E European Studies.

The US supreme court in 2020 ruled that much of eastern Oklahoma is Indian Country, confirming treaty rights of the Muscogee (Creek) Nation, as well as local Cherokee, Chickasaw, Choctaw and Seminole Nations. The ruling came in a context of heightened societal awareness for rights of BIPOC. Poet laureate Joy Harjo and Lawyer Sarah Deer provided reflections. Ramifications ensued and in 2022 McGirt v Oklahoma was revised with further infringements on tribal self-governance.

Land: Virginia Rappahannock have regained riverside land in historical partnership and Monacans have won a battle to save burial grounds and their historic Rassawek capital. Two Delaware Indian groups, Nanticoke and Lenape, are buying back ancestral lands. Similar movements in California and the mid-west are using Land Trusts to reclaim homelands. Georgia is integrating Muscogee (Creek) tribal lands into plans for Ocmulgee Mounds National Park. Bears Ears, Grand Staircase-Escalante, and Northeast Canyons and Seamounts were restored — great news for the Inter-Tribal coalition of the Navajo Nation and the Hopi, Ute Indian, Ute Mountain Ute and Pueblo of Zuni Tribes that fought for this since 2017.

Indigenous at GU: Anishinaabe Theater Exchange (new window) was at GU for the May 4 opening of the Lab for Global Performance and Politics’ annual (new window) “Gathering.” Also featured was the play Andares weaving Mayan, Muxe and Wixarika Indigenous myths with current concerns. These exciting events are available on the Lab’s youtube. The background panel “How We Go Missing” was co-sponsored by the Racial Justice Institute 4/29 and is available on request. Artist-performer Edward Keith Colston (Tuscarora/ Lumbee) presented in Professor Anita Gonzalez’s Cross-cultural Performance class 4/7/22. He is an important local resource: https://www.youtube.com/watch?v=P37HrB5Cwss (new window). Center for Latin American Studies sponsored “Embracing Multiple Visions of Indigenous Education in Latin American Universities:  Experiences in Mexico and Peru“ 4/4/2022.

Indigenous activists were in Scotland for climate change workshops and demonstrations. A summary of Indigenous statements and actions is at Cultural Survival.

In honor of American Indian and Alaska Native Heritage November 2021, the Census Bureau released new data. Indigenous Peoples’ Days and Months call attention to issues but symbolism can be augmented every day.

Congresswoman Deb Haaland (D-New Mexico), confirmed at the cabinet level as head of the Department of Interior (Deb Haaland Is Sworn In As Interior Secretary), continues to make news. Brookings provided perspective, as did her 2021 UN address. See her dialogue with Joy Harjo.

“Native American History in the Capital: Discovering Indigenous DC” is presented by Elizabeth Rule (Chickasaw; George Washington U and American U) to introduce her DC app (see below). A video link is provided on request.

National Museum of the American Indian

The National Museum of the American Indian offers a wide variety of online programming and events.

Representative Debra Haaland (D-New Mexico) was on Campus March 26, for a forum on “Intersectional Feminism in Congress” and for the symposium “Missing and Murdered Indigenous Women” November 26. She is one of the first Native American women elected to Congress, leading the legislative effort for Voting Rights, the Environment, the $15 minimum wage, and solving the cases of missing and murdered Native American women.

On January 18, 2019, the Indigenous Peoples Movement sponsored a march in Washington, DC to bring awareness to the injustices facing indigenous men, women, and children around the world. Co-sponsors included Cultural Survival.

All are welcome to join our mailing list to learn more about new events of interest on the Georgetown campus and in the Washington metro area.

Explore our Resources and Other Offerings! 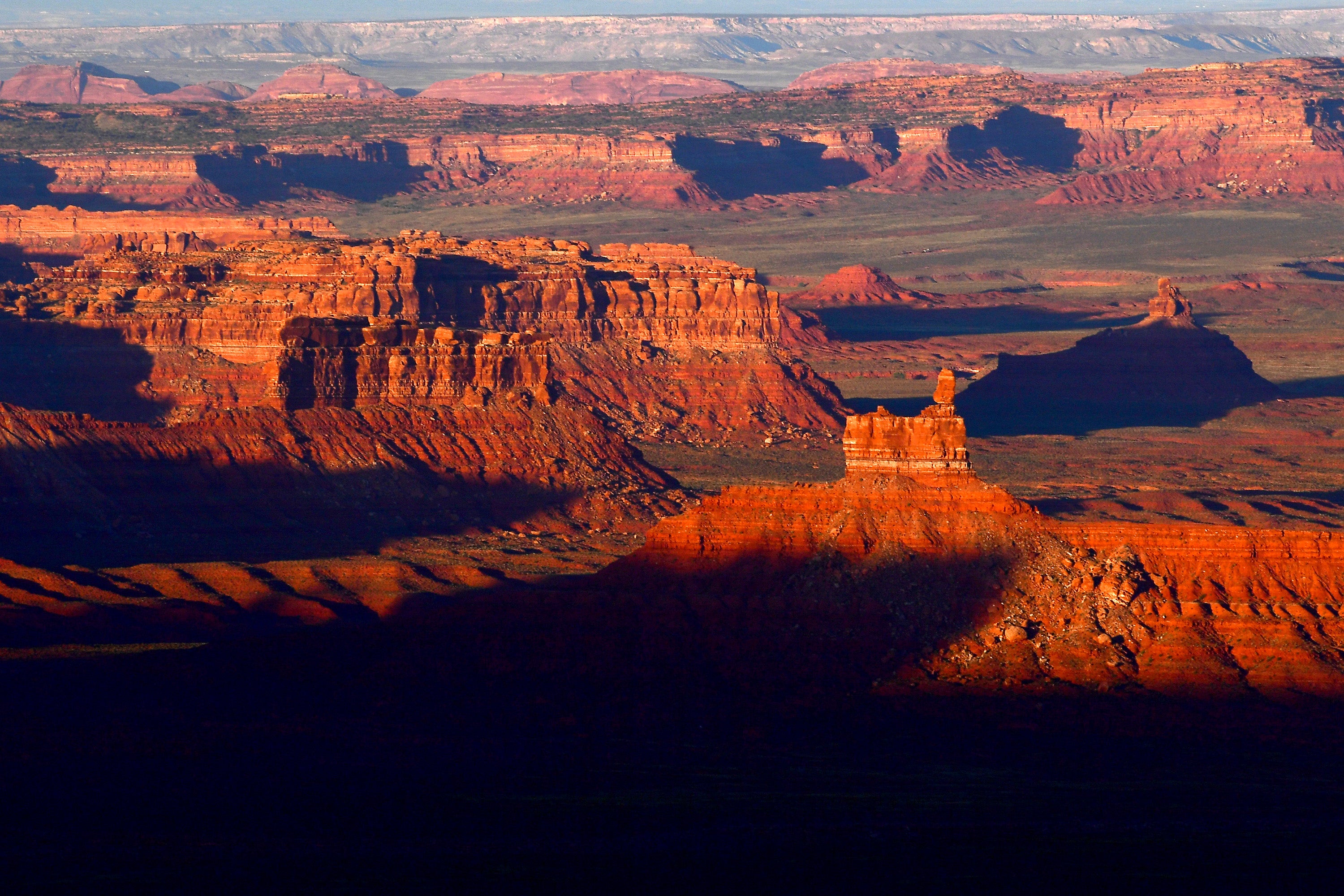 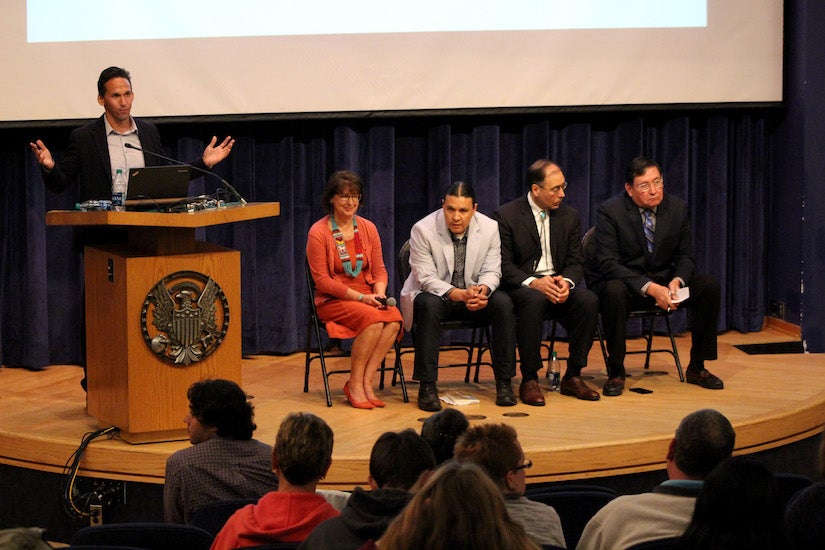 Justice in America for Native Americans

Watch the video of the April 24, 2017 panel and stay current on the Health Law Initiative’s continued work on Justice for Native Americans 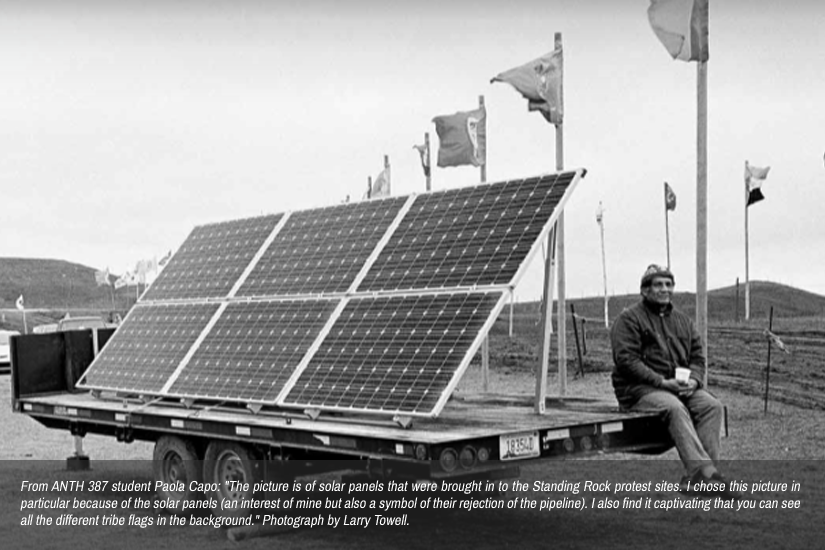 The Indigenous Studies Working Group maintains a growing list of resources for Indigenous studies, support, and outreach on the Georgetown campus, throughout the Washington metropolitan area, and across the United States. 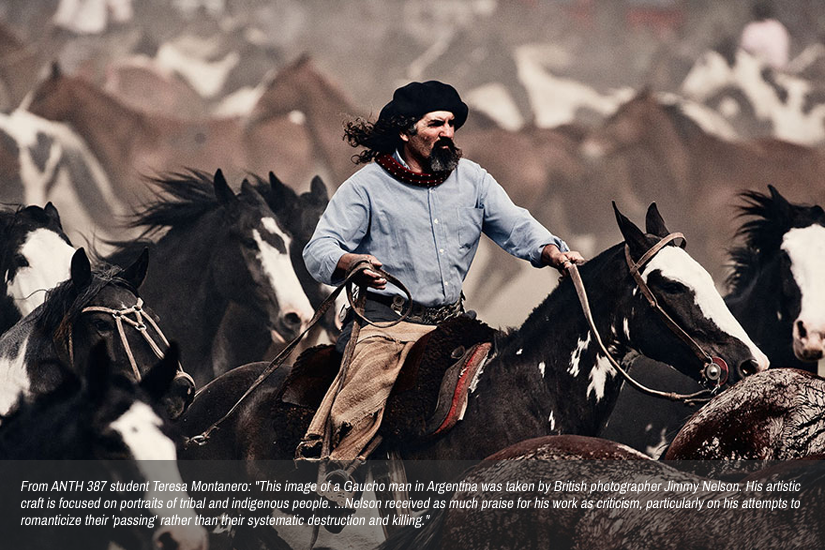 Browse our growing list of academic and popular literary sources for those interested in learning more about Indigenous histories, cultures, and politics.

See our extensive listing of wide-release and independent films, documentaries, and series, many directed, written, and performed by Indigenous directors and actors themselves. 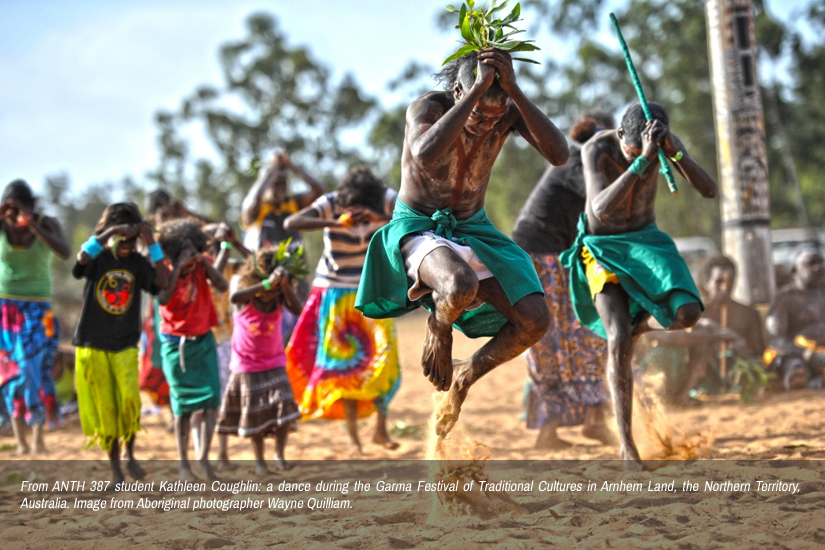 See examples of traditional and contemporary Indigenous music and visual arts from performers and artists across the world.